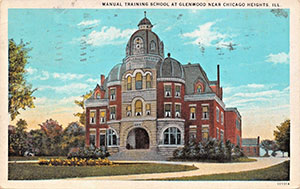 The village is home to the privately funded Glenwood School, established in 1887 in Chicago by Robert Todd Lincoln and Oscar Dudley.

Residents of Glenwood have strong community values and enjoy quality living. Community spirit and civic action thrive in Glenwood with the help of many organizations such as Lions, Rotary, Junior Woman's Club, etc,. Volunteers work to better the community and help fellow residents during various community events held throughout the community.

The neighborhood is a showcase of architectural styles. Renovation of well-constructed older homes, many on large shaded lots, is on the upswing. Well kept middle class residential areas dominate the Village landscape. Some of the newest neighborhoods include upscale developments featuring large custom homes. The village maintains neighborhood parks throughout the community providing recreational areas for residents young and old.

Glenwood is located in Cook County, 23 miles S of the Loop. The suburban village of Glenwood is partly surrounded by Cook County Forest Preserves. Glenwood's downtown, with its recently constructed but traditionally styled brick municipal building and relatively modest homes located along a grid of streets, seems far removed from the crowded sprawl of the surrounding suburban area.

The village of Glenwood, Illinois, was founded in 1846 as Hickory Bend—a good name considering the abundance of hickory trees in the area and the winding Thorn Creek, then known as Hickory Creek.

Although freight train lines pass through the village, the nearest Metra rail stop is in neighboring Homewood, and fewer than 1 in 13 Glenwood residents takes public transportation to work. The overwhelming majority drive to work, spending on average more than one hour per day commuting. Click here or on map below for Image Gallery 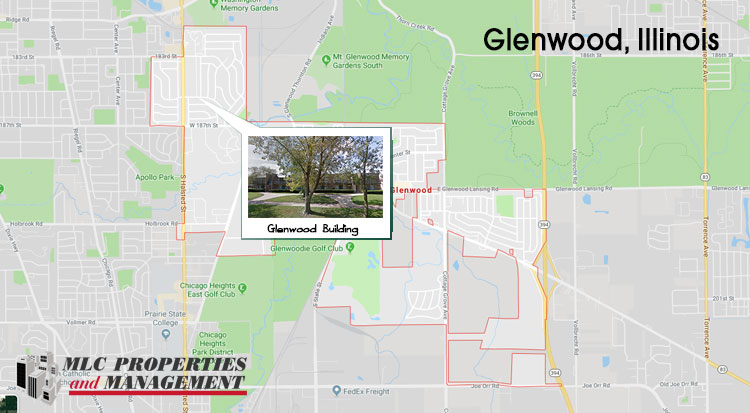 Glenwood’s school system, Brookwood School District 167, partners with the community and the parents to provide a nurturing, yet academic atmosphere where the students are prepared for the challenges they will face in the world of tomorrow. Public schools in Glenwood include Longwood Elementary School, Hickory Bend Elementary School, Brookwood Middle School, and Brookwood Junior High School. Glenwood Academy (formerly called Glenwood School for Boys and Glenwood School for Boys and Girls) is also located in Glenwood.

The public library houses a collection of more than just books. It also includes extensive, diverse, and well-balanced collections in a wide variety of formats for public use, as well as to provide public access to and training in available information resources in all media formats, including all forms of print, audiovisual, and electronic media. Computers are available for adults and children at the library. In addition to being an informational resource to the Village's residents, the library is a vibrant place for young and old alike to gather.

The village of Glenwood, Illinois, was founded in 1846 as Hickory Bend. The village most likely would have remained a small farming community had it not been for the decision of the Chicago, Danville and Vincennes Railroad to lay tracks through Hickory Bend. In 1871 the village of Glenwood was surveyed along the recently completed Chicago & Eastern Illinois Railroad. Glenwood served as a depot for local farmers and a home to workers employed in the railroad's nearby switch tracks, round table, and coal yards. About 500 residents incorporated as a village in 1903. The settlement grew as the railroad developed.

Glenwood is situated on the ancient coast of Lake Michigan known as the Glenwood Shoreline and is home to the Glenwood Manual Training School. Founded in 1887 with the help of Robert Todd Lincoln, the school became a residential institution for boys ages 8 through 16 who needed a home for one reason or another.

Despite some unsuccessful subdivision activity in the 1920s, Glenwood remained a small village through the 1950s. However, nearly 3,000 homes were constructed between 1960 and 1980, when the village's population peaked at 10,538. In 2000 there were 9,000 residents in the village. 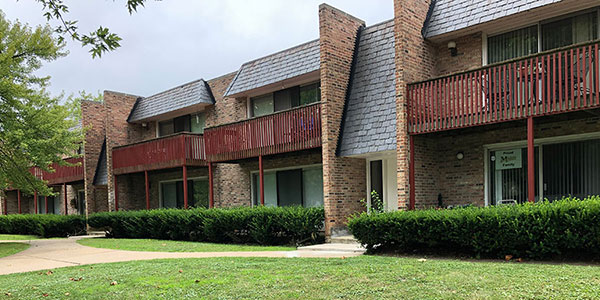 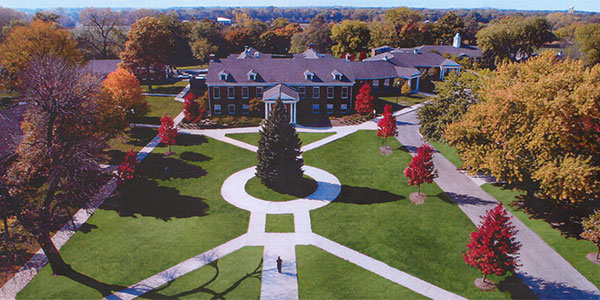 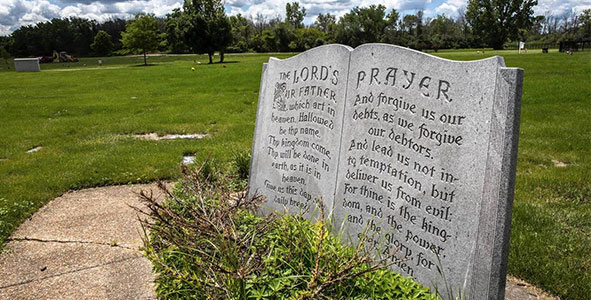